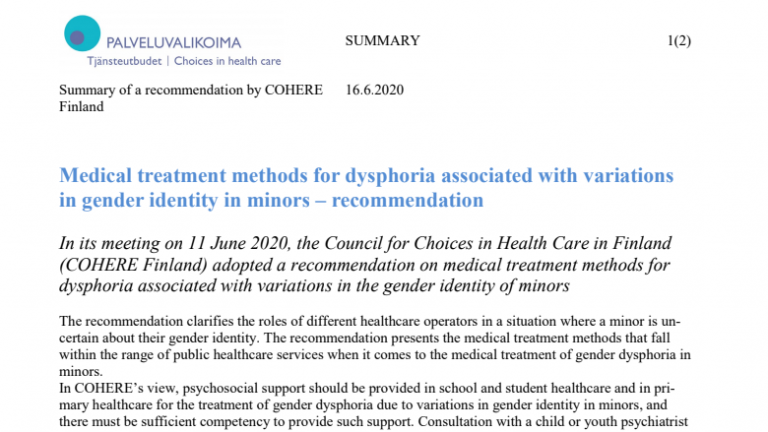 Western countries around the world are grappling with how to treat the exponentially growing number of children and adolescents being referred to gender clinics for puberty blockers, cross-sex hormones and gender-affirming surgery. Finland recently issued very strict clinical guidelines for the treatment of children with gender dysphoria.

There are a number of important differences in the Finnish guidelines compared with how Canadian clinics are treating gender-related distress.

These are significant differences from Ontario, BC and other Canadian healthcare jurisdictions where there are no minimum age restrictions for gender-affirming surgery and where parents and detransitioners have reported that hormone interventions have been initiated within the first or second appointments at various gender clinics across the country.

In Canada, there continues to be pressure to “fast-track” medical transition. A report issued in early 2019 based on survey results of patients at the CHEO gender clinic (Children’s Hospital in Eastern Ontario in Ottawa, Canada) stated: “Clients were required to attend too many appointments in order to access the care that they needed. The average number of appointments required before starting hormones was 11, which indicates both a significant wait time and an extensive assessment process.” This result is based on a small survey of 53 patients and it is unknown what the actual average number of appointments is prior to initiation of medical transition.

What Can We Learn From Finland?

The Council for Choices in Health Care in Finland (COHERE Finland) was tasked with creating an expert group to evaluate the clinical guidelines concerning medical treatment for people with gender dysphoria and the ability for people to access the publicly funded healthcare system for such treatment. COHERE works in conjunction with the Ministry of Social Affairs and Health, and its task is to issue recommendations on services that should be included in the range of public health services.

In a request to the COHERE Secretary on behalf of interested Canadians, the following information was disclosed:

A question was asked about legislation related to gender identity and access to healthcare services given that Finland has a publicly funded healthcare system similar to Canada’s. The response was:

“In Finland we have no legislation that gives the person the right to decide what services that person can get from publicly financed health care. There has to be a medical ground for both the diagnosis and the treatment. Our legislation about equality and non-discrimination does not change the situation.”

COHERE also provided information about the expert group that was involved in collecting the background information and formulating the recommendations. It consisted of a multi-professsional team (psychologist, adolescent psychiatrist, adult psychiatrist, gynecologist, plastic surgeons) a health economist, three lawyers (one Involved in renewal of legislation on transgender and health care) and an ethicist (who is also a psychiatrist). The secretary consisted of a physician and a lawyer. A systematic review of evidence was conducted by an independent organization and an ethics analysis was conducted by two ethicists, one being a member of the expert group and the other, a University researcher.

Excerpts from the reports are below:

Gender dysphoria has increased in prevalence both in Finland and in other Western countries.

In COHERE’s view, people experiencing a lack of clarity related to their gender identity should be provided with psychosocial support in line with the severity of their symptoms and the need for care as part of the primary or specialised healthcare provided by their municipality. Any assessment of the need for psychiatric and psychosocial care, and any treatment deemed necessary, should be arranged before the person is referred to the centralised research clinic so that the evaluation period can be initiated. These measures would improve the appropriate allocation of healthcare resources and ensure the timeliness of the diagnostic process and any treatment process.

It is medically justified to send people to the multi-professional research clinics at HUS and TAYS if they meet the following criteria. The person has a significant and prolonged gender conflict that causes reliably identifiable and harmful suffering in everyday situations, the person has undergone diagnostics and treatment of possible concomitant psychiatric symptoms and their continuation during and after treatment, if necessary, has been ensured, and the person has been confirmed to have the psychological conditions and sufficient functional capacity for a demanding evaluation.

Medical care in research clinics is always planned on an individual basis, and the treatments to be carried out must be medically justified in relation to the desired outcome. When deciding on treatment measures, it must be ensured that the dysphoria associated with gender identity is persistent (> 2 years), that the person can consistently describe how the dysphoria is harmful to them in everyday situations and that it can be reliably established that the dysphoria is detrimental to their social life or professional career or causes significant suffering. In addition, the personal and identity development of the person must be sufficiently structured, and appropriate arrangements must be made for the diagnostics and treatment of any simultaneous psychiatric symptoms. Treatment measures that modify the body to be more congruent with the person’s gender identity can be carried out if the person can reasonably justify the need for them and is aware of the risks associated with them.

Specific guidance developed for the treatment of children

In COHERE’s view, psychosocial support should be provided in school and student healthcare and in primary healthcare for the treatment of gender dysphoria due to variations in gender identity in minors, and there must be sufficient competency to provide such support.

Children who have not started puberty and are experiencing persistent, severe anxiety related to gender conflict and/or identification as the other sex may be sent for a consultation visit to the research group on the gender identity of minors at TAYS or HUS. Any need for support beyond the consultation visit or need for other psychiatric treatment should be addressed by local services according to the nature and severity of the problem.

If a child is diagnosed prior to the onset of puberty with a persistent experience of identifying as the other sex and shows symptoms of gender-related anxiety, which increases in severity in puberty, the child can be guided at the onset of puberty to the research group on the gender identity of minors at TAYS or HUS for an assessment of the need for treatment to suppress puberty. Based on these assessments, puberty suppression treatment may be initiated on a case-by-case basis after careful consideration and appropriate diagnostic examinations if the medical indications for the treatment are present and there are no contraindications. Therapeutic amenorrhea, i.e. prevention of menstruation, is also medically possible.

Based on thorough, case-by-case consideration, the initiation of hormonal interventions that alter sex characteristics may be considered before the person is 18 years of age only if it can be ascertained that their identity as the other sex is of a permanent nature and causes severe dysphoria. In addition, it must be confirmed that the young person is able to understand the significance of irreversible treatments and the benefits and disadvantages associated with lifelong hormone therapy, and that no contraindications are present.

If a young person experiencing gender-related anxiety has experienced or is simultaneously experiencing psychiatric symptoms requiring specialised medical care, a gender identity assessment may be considered if the need for it continues after the other psychiatric symptoms have ceased and adolescent development is progressing normally. In this case, a young person can be sent by the specialised youth psychiatric care in their region for an extensive gender identity study by the TAYS or HUS research group on the gender identity of minors, which will begin the diagnostic studies. Based on the results of the studies, the need for and timeliness of medically justified treatments will be assessed individually.

Surgical treatments are not part of the treatment methods for dysphoria caused by gender-related conflicts in minors. The initiation and monitoring of hormonal treatments must be centralised at the research clinics on gender identity at HUS and TAYS.

Research data on the treatment of dysphoria due to gender identity conflicts in minors is limited.

COHERE considers that, moving forward, multi-professional clinics specialising in the diagnostics and treatment of gender identity conflicts at HUS and TAYS should collect extensive information on the diagnostic process and the effects of different treatment methods on the mental wellbeing, social capacity and quality of life of children and youth. There is also a need for more information on the disadvantages of procedures and on people who regret them.

We sourced a translation of the guideline document “Medical Treatment Methods for Dysphoria Related to Gender Variance in Minors” which can be downloaded here: 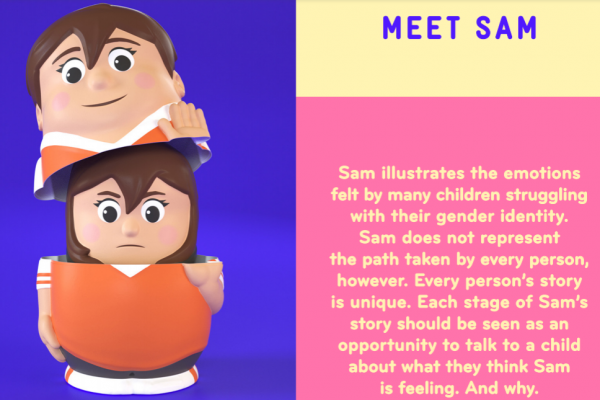