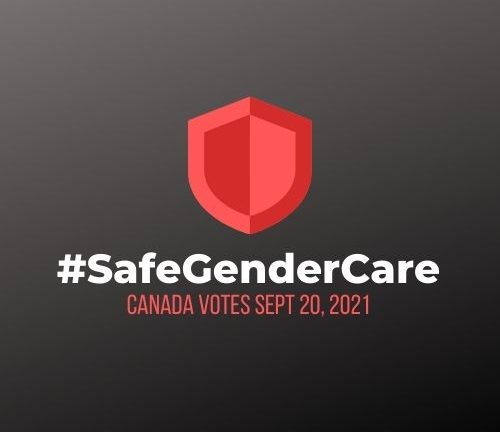 Voters: Please send to your election candidates! Tag your candidates on social media and use the hashtags #SafeGenderCare and #Election2021. To find the candidates in your riding, go to https://www.elections.ca/Scripts/vis/FindED?L=e&QID=-1&PAGEID=20

We are a group of concerned clinicians, parents, and people with gender dysphoria (GD) (some who have medically transitioned, some who are managing their GD non-medically, and others who have returned to their natal sex identification). There has been an exponential increase in children and young people seeking gender transition in Canada. At the same time, there is growing worldwide concern about the recently adopted and poorly understood “affirmation” approach being applied to gender-questioning children and young people, and a corresponding loss of trust across the political spectrum in the professional community advocating for these services.

We are requesting that Canada follow the lead of other progressive countries to ensure that parents, educators, and medical professionals are able to safeguard young people from inappropriate interventions and protect the independence of clinicians to support those who experience gender dysphoria with evidence-based clinical approaches.

Election candidates: Show your concern and support by signing the candidate pledge below. As a supportive background document, please refer to the FAQ attached.

I, [enter name in form below], pledge to support a free discussion of gender identity issues with fair representation of all points of view. In particular, to ensure we safeguard Canadian children from unnecessary and potentially harmful medical interventions, I pledge to require the Canadian government to conduct a non-partisan and unbiased review of the current medical and mental health practices being offered to gender-questioning children and young people in Canada.

1. By directing the appropriate agency of Health Canada to conduct a review of the diagnosis and treatment of gender dysphoria in minors along the lines of the reviews in Finland, Sweden, and the UK with a view to developing reliable and unbiased clinical guidelines based on the available international evidence.

2. By ensuring that the Canadian government does not inadvertently legislate a one-way path to medical transition with a poorly worded conversion therapy ban that eliminates options for gender-questioning children to access neutral psychotherapy as a treatment option.

3. To provide support for research into detransition and desistance in order to create an informed and complete understanding of the outcomes of various gender healthcare pathways.

More information can be found at our partner organization Genspect:

1. Gender questioning children and young people are able to access safe and evidence-based healthcare in Canada that is aligned with international standards of care. True/False?

False. Progressive countries around the world are beginning to review and question the recently adopted and poorly understood clinical protocol of “affirmation” that has been adopted by Canadian healthcare and other civic institutions. For example:

Sweden: The Social Democrat government called for a national investigation in 2019 which is still officially underway. Independently, in May 2021, Sweden’s largest children’s hospital and pediatric gender transition group (at Karolinksa Hospital) stopped all gender transitions of under 18s outside of a strict clinical trial protocol. This led to hospitals throughout Sweden following suit and Sweden’s Health Authority updating guidelines.

UK: A lawsuit brought against the UK’s gender transition clinic (Tavistock) resulted in the courts applying the need for a “best interest” court order prior to young people undertaking gender transition. Pediatric medical transitions were paused in late 2020 to conduct a national, independent, unbiased, and systematic review of the treatment protocols provided to young people with Gender Dysphoria. Initial results from the National Health service (NICE) review (2021) determined “low-certainty” of any benefits and relatively unknown risk profile.

Finland: Conducted an independent review to ensure there was sufficient justification for the public health system to be involved in pediatric gender transition. Revised treatment policy in 2020 to recommend psychotherapy as the first line treatment over puberty blockers and hormones, and no surgeries for youth under 18. Urged caution about uncertainties of medical transition for those younger than 25.

2. The most likely outcome for a gender-dysphoric child is that they will be a transgender adult. True/false?

False. All 12 studies to date that have evaluated long-term outcomes of gender-variant children found that most will grow up to be gay or bisexual adults. Among children who met the full diagnostic criteria for gender dysphoria, 67% had a natural resolution of their distress. Among those with threshold cases, the rate of desistance was 93%. Gender-non-conformity and gender dysphoria in childhood have long been known to be forerunners of future homosexual orientation.

False. The Dutch protocol recommended against social transition of children because it’s a form of psychosocial intervention that carries risks. Since the majority of children have historically become comfortable in their natal sex sometime before reaching mature adulthood, social transitioning creates difficulties for children later in life as they have to grapple with a complex process of detransition. Further, socially transitioned children are more likely to experience persistent gender dysphoria and seek medical transition. [See https://genderreport.ca/gender-affirming-care-is-changing-the-pathways-to-desistance/ ]

4. A referral to an affirming mental health professional includes a thorough exploration of contributing factors, and an attempt at non-invasive resolution of distress, before endocrine or surgical interventions are recommended.

False. Gender-affirming health professionals subscribe to a school of thought that the child knows their true gender and they merely need to be supported in their medical transition. Gender-affirming clinicians see their primary role in educating the family and helping the family accept the child as a member of the opposite sex or different gender. In contrast, neutral therapeutic approaches aim to holistically evaluate the child and their situation, recognizes that identity exploration can be both an adaptive and a maladaptive developmental coping mechanism, and allows for a neutral space for exploration. [See https://segm.org/ease_of_obtaining_hormones_surgeries_GD_US which applies to the Canadian context as well. In fact, Canada is leading the world in innovation of “affirming” care with a new “gender health screener” from TransCare BC]

5. Gender transition is important to reduce the risk of suicide.

False. It is true that the rate of suicidality among gender dysphoric youth is elevated; however, it appears to be on par with youth who have mental health problems but no gender dysphoria. Unfortunately, transition has not been shown to reduce long-term suicide risk. No study to date has been able to show a long-term decrease in suicide or suicidality among transgender-identified individuals. The only study to have made a claim of reduced suicidality was recently corrected. The study, which was based on one of the most comprehensive long-term data sources from Sweden, initially reported that while hormones did not appear to improve mental health outcomes, surgeries did. However, this analysis suffered from significant flaws. Once the data were reanalyzed using a more rigorous methodology, no evidence was found, and the journal issued a correction. [See https://segm.org/ajp_correction_2020]

Thankfully, suicide in children is a very rare event. All suicides are tragic events. Dysphoric youth expressing suicidal ideation must be treated with proven, evidence-based protocols for self-harm prevention.